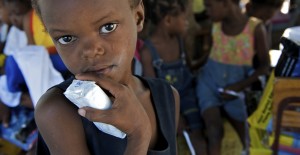 On 2 February, Lamonsia Laurent, 4, holds a bar of soap that she received during a distribution of newly arrived care packages for children, at the UNICEF-assisted Foye Zanmi Jezi orphanage, in the Lilavois neighbourhood of Port-au-Prince, the capital. The packages, a donation from the US Fund for UNICEF and its corporate partners, are destined for up to 50,000 children who have been affected by the earthquake. The quake destroyed both the orphanage building and the adjacent primary school but the children were playing outside at the time and all survived. But recovery will take some time: What will happen to [the children], said Sister Marleine Joseph. They did not have much but whatever little they had is all gone. They are so traumatized. [#5 IN SEQUENCE OF 10]

On 2 February 2010 in Haiti, UNICEF initiated delivery of 50,000 care packages for children affected by the 12 January earthquake, in Port-au-Prince, the capital. The quake killed an estimated 112,000 people and left 1 million homeless. Major government and private infrastructure were destroyed or heavily damaged. In Port-au-Prince as many as 800,000 people continue to live in makeshift settlements, despite an exodus of up to 340,000 from the devastated city. The care packages, containing a variety of essential items including toiletries, clothing, footwear, blankets, mats and other basic items, are the result of a collaboration of UNICEF and the United States Fund for UNICEF (USF) with varied private sector partners. Partners included corporations such as UPS, Colgate-Palmolive Company and Henkel Consumer Goods Inc, which provided in-kind supplies or logistics and transportation support, and individual volunteers who helped sort and pack the supplies. The packages arrived in Port-au-Prince late on the night of 1 February and were being distributed by early the next morning. Recipients include many unaccompanied children who are presently being cared for at temporary UNICEF-assisted sh